Mick, Mike, Mickey or even Michael Pugh has been a professional comedian for 26 years and his wealth of experience is evident in every appearance.

Mike has worked in every major theatre in England, including the Royal Albert Hall and several performances at the legendary London Palladium.

He even once shared the Sun newspaper’s ‘Comedian of the Year’ award with Lee Evans.

While his TV appearances are too numerous to mention, Mike is particularly proud of three appearances on the National Lottery Live and his own half hour slot on Sky One which won several awards.

During the 90s, Mike turned his hand to writing for television and radio and many household names have delivered scripts straight from Mike’s pen, which he affectionately describes as the “Pugh-Bic”.

Around this time, Mike also turned to speaking at dinners. To list the sporting celebrities that he now regards as friends would be an exhaustive task, but he was particularly delighted to have spent two years touring with one of his football heroes, George Best.

Mike is equally at home working as a comedian or as the M.C. and is often booked for his auctioneering skills alone.

While interviewing Mick to produce this very short biography, he modestly asked me not to write that he is, in my opinion, one of the funniest, cleanest, stand-up comedians in the country…. sorry mate, I’ve done it.

Be the first to review “Mike Pugh” Cancel reply 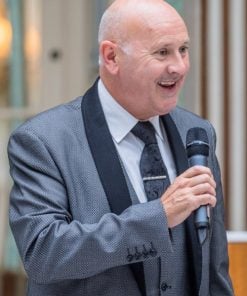